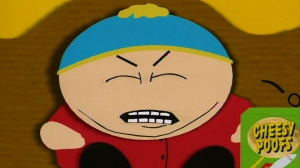 Short and sweet:  how in the name of sweet holy fuck do you rack up $82,000 in expenses on fucking stadium food and beer when you have a gastric band in yo motherfucking belly?  Let’s just ask the resident blowhard in Joisey, Governor Chris Christie, to tell us.  But he won’t.  He can’t.  His mommy told him not to talk with food in his mouth.

Now, I’m sure there is a logical explanation for this astounding display of supply chain management discipline.  After all, we Sayers-of-the-Word-NO make damn sure there are limitations in place so the P-Card system couldn’t possibly be abused.  You know, used at places such as department stores and sports arenas.  Unless, of course, you’re the governor and you can throw any purchasing and contract grunt out on their ass with the snap of a greasy finger and toss of a chicken bone over one’s rotund shoulder and quadruple chin.

Awww.  I’m being hard on the man, am I?  Fuck him.  I’m going to call him a fat, miserable lout.  I’m going to take the low road and mock him whenever the opportunity presents itself and it’s not solely because he’s from the cesspool that is New Jersey, either.  I’m going to do it because he’s a double-talking, idiotic shitstain who yells at teachers and is, generally, a blight on humanity.

$82,000.  How many teachers, combined, make $82,000 Governor Sammiches?  Of the teachers you have verbally eviscerated while provolone cheese drips down your Jabba the Hutt chin, how many of those would have to work one year to make $82,000?  And, what would their personal financial outlay be to make sure their classrooms are appropriately equipped with all necessary supplies that you and your horned cohorts cut from budgets like you slice through butter to put on your margarine covered bread?

Governor Sammiches, you could come up with an iron clad alibi.  You could provide receipts showing that you took every single foster kid and/or orphan in your state to a game for Christmas for all I care.  There’s no excusing $82,000 on foodstuffs in two years.  I don’t spend $82,000 on stuffed animals, toys for my kid, my hair and my wardrobe in a decade and I can spend some money.  I’m so motherfucking talented at spending money, I made a career out of it.

Such a gross display of disregard for one’s office, one’s civic duty and the tax payers is so vile it doesn’t even merit a spot in the Go Fuck Yourself Weekly hall of shame.  Nope.  It merits a much nastier penalty:  living in New Jersey for the rest of your artery clogged, loud mouthed life.  And to be precise – Newark or Trenton.