Perspective.
I has it.

It’s what most Americans don’t have. At least those who haven’t lived abroad for an extended period of time. They are, for the most part, totally unaware of how they and their country are viewed by other countries. As an American living outside of the United States I have the uncommon perspective of viewing my country from the outside, and I can tell you, at the moment it ain’t very pretty.

What I can tell you is that most of the people I know love the idea of America and the people of America. They think it’s fascinating that I come from there, and choose to live here. For the record, here is Sweden. This is a country that thinks so little of itself they can’t comprehend why anyone would want to come here to live indefinitely and deliberately. At the same time, they are so elitist, they make American exceptionalism look like nothing. They honestly believe they are the best at everything, but unlike Americans, they’d never dream of boasting about their superiority. That would be very un-Swedish. Instead they are casually patronizing about it in an, “Oh, you poor thing.” kind of way. Americans adore their flag and display it proudly everywhere and on everything for any reason or no reason at all. Swedes love their flag as well, so much so that they only bring it out for special occasions: National Day (kind of like Swedish Fourth of July), Mid-Summer (the most important Swedish holiday of the year), graduations and weddings. However, it’s considered very un-Swedish to display the flag for no reason other than, like their American cousins, pure patriotism. The Swedes believe without a doubt that they better than everyone else, but they have an uneasy relationship with patriotism. They keep outward displays of patriotism in check because it’s considered to be a sort of gateway drug to a fascist authoritarian regime ala Adolph Hitler.

Maybe the Swedes are onto something here. Maybe too much patriotism can be a bad thing. A very bad thing. It’s okay to know that you’re number one but don’t shout about it. Don’t shove it in people’s faces. Don’t threaten with bodily harm and/or death, those who disagree with you or who would rather not participate in your patriotic display. Too much patriotism riles people up and turns them into a mob. A mob with a funny-looking man gesticulating behind a podium and telling it that everything is going to hell, and it’s all the fault of the Jews/Mexicans/Muslims/Gays, and only he can fix things and make everything great again. Yes, great again, because obviously things were fantastic before Those People came along, and they can be Great Again if they all just went away, if they build a wall to keep them out, exclude them from entering the country, or if they’re already citizens and cannot be deported or excluded, put them in camps to keep Us safe from Them.

And the mob believes the funny-looking man. It responds to him and wonders why it never saw this before. Their Muslim neighbor was always friendly before but now that they think about it, there was always something Not Great about him. He’s probably building a bomb in his basement. And their Mexican co-worker is obviously a car thief, or a drug dealer or a pimp. They are no longer friendly neighbors or co-workers. They are dangerous infiltrators trying to undermine our freedom and our democracy.

However, the thing about the authoritarian figurehead and its mob is that they depend on one another. One cannot exist without the other. As soon as that strong authoritarian figure disappears, the mob evaporates. It turns into individuals who suddenly blink back into existence and ask themselves what the hell just happened. One thing that I’ve read a lot lately is that even if Donald Trump loses the upcoming election, that his supporters will still be out there and the thought of that scares the shit out of people. But without Donald Trump, the “Make America Great Again” movement will eventually quiet down and become only a whisper. I doubt he will have the stamina to continue his rallies after the election. And he’s not getting any younger. By the next election, he will be seventy-four years old. Will be run again? Or will he wait until 2024, when he’s 78? At that point, I doubt he would have the strength to make the effort.

After this election Donald Trump should just retire, secure in the knowledge that he came this close to Making America Great Again by leading the entire country over a cliff. But, it wasn’t meant to be. We like our country just the way it is, okay? We have no inclination for the kind of greatness that consists in persecuting and excluding anyone who is not a wealthy heterosexual white Christian male. Thanks anyway.

Today is the National Day of Sweden. It’s also International Kiss a Swede Day. In the interests of common decency, I won’t tell those of you who don’t already know what “kiss” means in Swedish. Look it up. 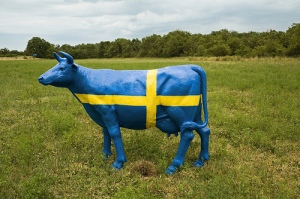 Here is the most random photo I could find.

It’s a fairly low-key day. In fact it didn’t even become a “red day” (that is, a national holiday) until 2005. Swedes, it would seem, are a little uncomfortable with celebrating their Swedishness and tread carefully on their national day.