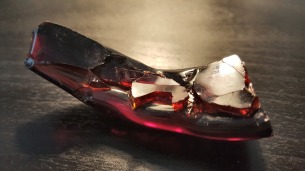 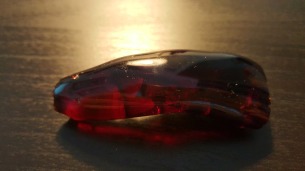 I dug a piece of ruby red glass out of the ground,
Pulled it up with the dead twigs of last year’s peony flowers.
It was intertwined with them, as if they were holding on to it.
Keeping a little treasure for their very own.

Like arrowheads in the Southwestern United States,
Such finds are fairly common around here.
Not too far from Nybro, home of Kosta Boda.
Here in the Kingdom of Crystal.

It’s hard to tell what this piece was meant to be.
Maybe a handle of some kind.
It’s curved and perfectly smooth on one side,
Sharp and jagged on the other.

This little town used to have its own glass workshop,
But it shut down many years ago.
No trace of it left now.
Apart from little artifacts like these.
It was probably part of a failed piece,
Cast into a waste pile.

A crystal midden, redistributed by bulldozers.
The little broken treasures lost,
Until dug out of backyard flowerbeds.