I’m a logophile, which according to my new dictionary, is “one who appreciates and enjoys words.”  I think that pretty much sums up all of us here at Random Misanthrope.  One would be hard-pressed to find a greater cabal of bibliophiles.  I used the word cabal because I’ve always wanted to use that in a sentence, and we are plotting to take over the literary world after all. 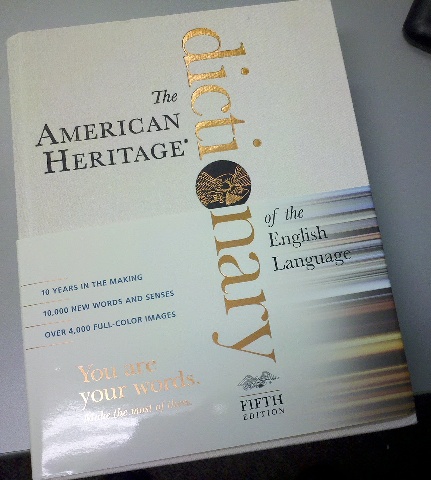 When my dear sister gave me an Amazon gift card for Christmas I thought long and hard about what to purchase.  That I would purchase a book was a given for sure, but what type of book?  Some of you might know my penchant for non-fiction, so it is with no stretch of the imagination that I would settle for something in that genre.

I have always coveted the Oxford English Dictionary, or OED — all 20 volumes of it!  Unfortunately my sister’s generous gift card fell short of the thousand dollars needed to purchase such a treasure.  Not to be deterred from owning a comprehensive dictionary of some kind, I stumbled across an article in the New York Times regarding the recently released 5th Edition of the American Heritage Dictionary.  Not only did two thousand plus pages worth of words intrigue me, but that it had taken a decade to update was equally impressive.  Even better was the fact that at $60 dollars it was well within my gift card’s price range.  I was even more pleased when Amazon was selling it for $38 dollars!  I don’t think I’ve ever clicked on an online purchase button quicker.

A few days later the tome of words arrived.  At 8 pounds shipping weight and 11.3 x 8.8 x 2.4 inches, this is an impressive book to carry around.  But as we all know, looks are not everything: it is what is inside that counts.

The first trial of my lovely dictionary came at work when my boss lamented to me that the local newspaper had misspelled an ad which he had placed.  I did not doubt for a second the veracity of his claim, but as the good Ronald Reagan once remarked about the Russians: “Trust, but verify.”  The word in question was in memorium, which is what the newspaper had printed.  My boss was adamant that it was spelled in memoriam and vehemently defended his position.  To avoid a prolonged logomachy, out from my briefcase came the new American Heritage Dictionary.  A cursory look-up vindicated my boss and provided a J’accuse damnation to the local newspaper editors.

Since then I’ve had the pleasure of looking up several more words, all of which were found in my dictionary.  The biggest workout came while reading the late Christopher Hitchens’ autobiography, Hitch-22.  Not even halfway through the book I stumbled across words such as: dyspeptic, polemical, ontology, lambent, milliner, inchoate, taciturnity, portentous, anomic, lugubrious, scintilla, doggerel, donnish, and apotropaically to mention just a few —  The American Heritage Dictionary defined them all.

When it comes to looking up words I am old-school, I prefer picking up a real book and turning the pages.  But not everybody is like me and the editors of The American Heritage Dictionary were wise to include a free companion app with their dictionary, a $24.99 dollar value!  Inside the hardcover is a sheet containing a code which you can redeem online and  download the app for either an iPhone/iPod, iPad, or Android phone.  Please be advised that you can only use this code once, so if you have all three of these devices, you can only activate the app on one of these, unfortunately.  Sad as this might be, the convenience of having 175,000 definitions, 4,000 full-color images, and 69,000 real-voice pronunciations at your fingertips is unbeatable.  I decided to download and activate the dictionary app on my Android smartphone and run it through its paces.  The first word I punched in was Kokopelli in honor of my anthropologist friend Frances, and lo and behold, the dictionary had it!  Impressive… 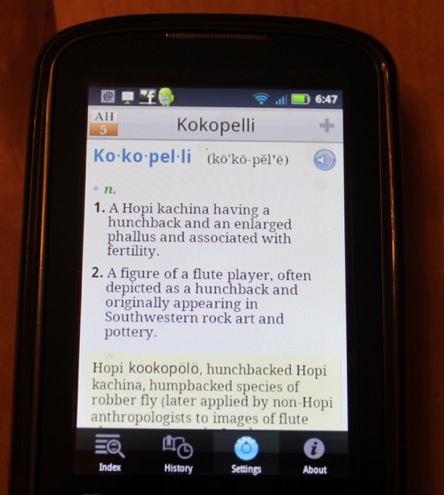 As I mentioned before The American Heritage Dictionary contains over 4,000 full-color and black-and-white images which is great for people like me who like to flip through pages and browse.  This morning I was flipping through the dictionary and my two and a half year old son screamed in delight when he saw a picture of a llama.  Later that afternoon I screamed in delight when I stumbled across one of my favorite Swedish authors, Selma Lagerlöf.  This for me solidified The American Heritage Dictionary as one of my favorite go-to books.

A good dictionary should never be static, and like society as a whole, should endeavor to evolve.  Ten years since the last edition with 10,000 new words and senses, The American Heritage Dictionary has some surprising additions.  My personal favorite is: asshat. 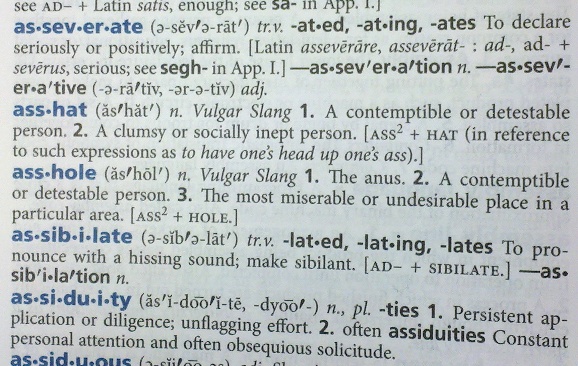 In summation, The American Heritage Dictionary, 5th Edition is a winner in my book.  A perfect companion for logophiles who cannot afford to buy a complete set of the Oxford English Dictionary.  I could not be happier with this purchase and would recommend it to all bibliophiles and aspiring writers.

I like Cafepress because they will print you anything you want and the turn-around time is very fast.  Their prices could be a bit cheaper, but considering that most brick-and-mortar screen-printing places have additional set-up fees — with Cafepress they are included — they are still very reasonably priced.

Like Mike Rowe from Dirty Jobs I’m a big fan of baseball caps.  Not only are they practical, providing shade for your eyes; but you don’t ever have to worry about how your hair looks.  Until you take off your cap of course hahaha!

Anyhow, I decided to custom-order a bibliophile cap from Cafepress and this is what I came up with! 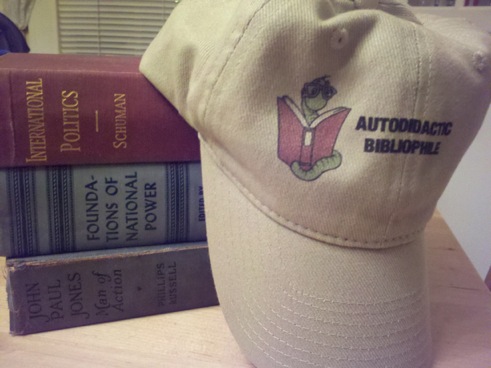 I’ve always been a bibliophile.  I love reading.  I love walking into libraries and book shops, browsing endless rows of books, stacked from the bottom of the floor to the top of the ceiling.  I fear that one day I will be killed by a bookshelf falling on me, but what a death that would be!  Alas, they will say, “he loved books and they killed him.”  I can think of no better epitaph than that.

Recently, I’ve taken up the obsession of book collecting, a noble pursuit, and one that is filled with many mysteries.  Few creatures are as misunderstood as the book collector, and especially the ones of the antiquarian kind.  They have their own language, and not many understand their bibliomania.  Most are not in it for the money, but for the passion, for the pursuit of that elusive book that haunts them late at night.  Is it a first edition they seek?  Is it a signed copy?  Is it just the name of the author that drives them to despair?  They must possess this treasure at seemingly any cost or detriment to their mental sanity; like a CERN scientist chasing neutrinos with chalked hands and a collider.

No doubt you are thinking, “well what book do you seek, good Sir?”  I shall tell you, it is a signed first edition of Damn Rare: The Memoirs of an African-American Bibliophile by Charles L. Blockson.  The irony is not lost on me that I’m searching for a rare book written by a rare bibliophile with “rare” in the title.

In my first attempt to locate this book and read it, I scoured my public library, but to no avail.  Not even through an inter-library loan could a copy be found.  The nearest library that actually has a copy is in Champaign-Urbana, a good 45 minutes drive away, and this being an academic library I can not check it out without being a student or faculty of the university − for shame!  Searches on AbeBooks and Amazon give me prices ranging from $30 to $130 dollars should I wish to purchase a copy.  This cements my theory that  the book is a rarity indeed, for why else would it be so expensive?  I must now commit my time and energy to tracking down a copy of this book and I will keep you posted on my progress.

I’m a bibliophile.  I don’t read books, I devour them.  Though there’s nothing like holding a real book in your hands, there are times when an online book has its advantages.  First of all, you can read books that are rare or are no longer in print.  Secondly, it’s convenient to have instant access to books; you don’t have to get out in the rain and you don’t have to worry about the opening and closing times of the library or bookstore.  Michael Pastore elaborates more on this concept with 30 Benefits of Ebooks.

Since my passion involves reading lots of non-fiction, research papers, newspapers, magazines, etc. and very little fiction and novels, I’m always on the lookout for a good  source of Ebooks.  My dream would be to sit and read all day in a university research library, but since I can’t do that with 3 young children, I have to settle for Questia.  Questia is a full-text online library with access to over 77,000 books, 4 million articles, and 250 respectable publishers such as John Wiley & Sons and Oxford University Press.

Of course access to such a source is not free, in fact you have to pay a subscription, but that is perfectly fine with me.  I don’t mind paying for things that work.  Questia works.  For around $99 dollars a year you get access to all the sauce I mentioned above.  Not bad considering that for about $8 to $9 dollars a month you get complete access to books and journals that are of research caliber.  Well worth the cost in my opinion.

So, Sharkette sent me out to pick up some soap at Sam’s Club today.  Personal hygiene is exceedingly important, especially if you are in charge of multiple babies prone to spit, vomit, and poop.  Driving past the Decatur Public Library, out of the corner of my little eye, I spied: 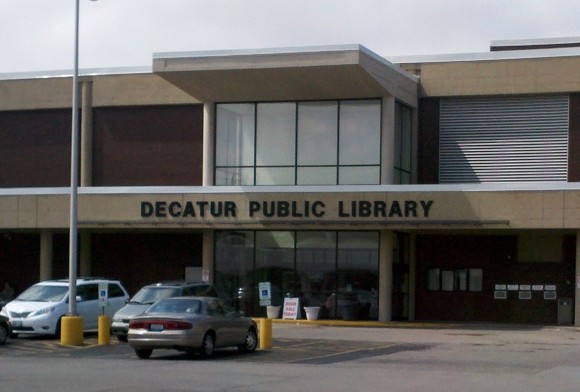 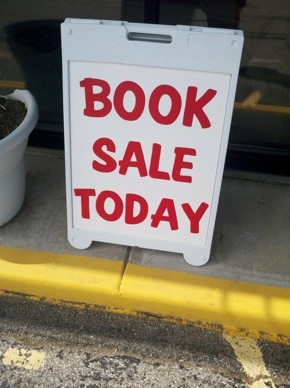 To the true bibliophile, they might as well have given gasoline to an arsonist or handed out Bud Light at an AA meeting: a used book sale sign gets them every time.  I immediately commenced a U-turn maneuver, doubled-parked, and blocked in the Book Mobile.  Actually, I didn’t do any of those things, I just said that for dramatic effect.  But I did decide to investigate the book sale while grabbing my handy Friends of the Decatur Public Library canvas tote bag! 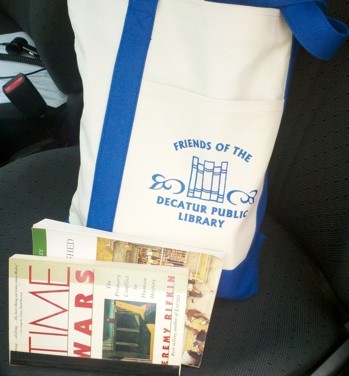 The badge of honor

You see when you carry around a canvas tote bag, whose sale supports your local library, you automatically say to the world, “I can read, and I promote literacy.” 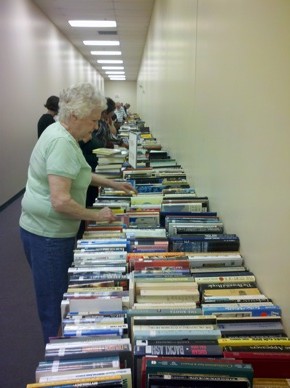 As I walked through the doors I got a welcome surprise:  today was fill-up-a-grocery-paper-bag-with-books-for-$5-dollars-each day!  Not only that, it was Non-Fiction Day!  Say it ain’t so, librarian?  Some of you might know that I’m a huge fan of non-fiction, so this was pretty much close to bibliophile nirvana for me. 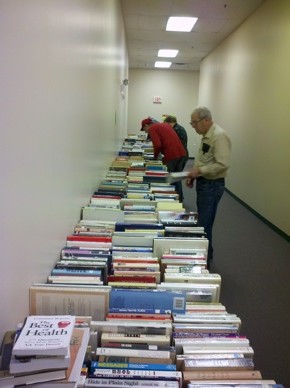 I felt like a bandit hauling away three bags worth of books for only $15 dollars, but this was truly a win-win situation for everybody involved.  The Friends of the Decatur Library got some more cash to support their operations, and I got thousands of pages worth of reading.  What was even more encouraging was the amount of people, including plenty of children, that were hauling away books.  It’s heart-warming to know that in this age of cellphones, the internet, and television, people still enjoy turning the pages of a good book! 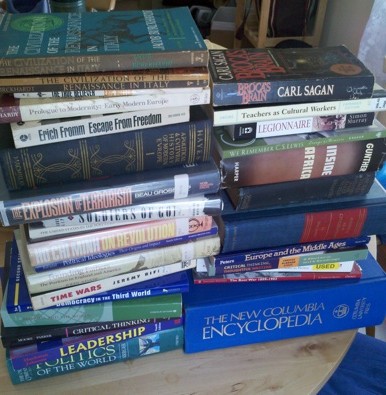